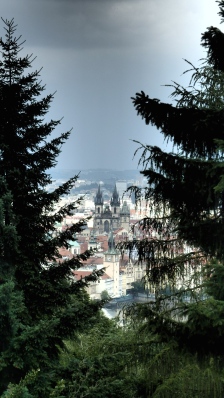 Once upon a time in a kingdom far far away in a land that was often Wintertime lived a Viking Princess. The problem with that Viking Princess was that she hated the Cold. And although her blood should be used to the Ice and Snow, considering her entire family from generations and generations had lived in the Cold, she, she only thrived in the short months of Summer. The rest of the time she would long for the heat of the Sun and the sound of crashing Waves.

Luckily for her though, Vikings are famous for their adventurous side and her family was no exception. They travelled and roamed lands wherever their fortune would lead them. At least this time the Viking Princess was like her family and she loved to discover new lands. Especially since most of the time it permitted her to escape the dreaded Winter. But not all the time. 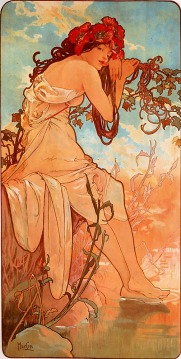 One day the Viking family settled in another Cold Kingdom. And oh how unhappy the Viking princess was. But she knew that no begging or pleading would do, she was stuck there. For a little while anyway. On the bright side, the Viking Princess wasn’t one to let herself be brought down so easily, you know Vikings are headstrong. So she still went to wander and discover this new land. And although she really didn’t like this one, that grey weather and those Frozen people that inhabited it really put a damper on her spirits, on one of her wanderings she found a friend.

She found White Tiger that day where she felt particularly Cold and was looking for warmth. She didn’t know why she felt drawn to him, because White Tiger didn’t speak much. Or maybe it was because she didn’t understand his language. And unlike her, White Tiger strived in the Cold. Which, she thought, made them that much different. But from the day they met, they stuck together. 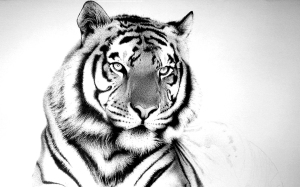 The two of them would wander around the land and the Viking Princess felt better and stronger when she knew Tiger was there. And little by little she would start to understand what White Tiger was telling her. Sometime he would speak to the Viking Princess of Passion and sometimes of Power, he would talk to her of physical and emotional Healing and of the gift of Foresight.

The Viking Princess was more than intrigued. She held on to every bit of information her mystical friend would give her. But at one point she realized, everything she understood and took in from White Tiger, her body didn’t know how to deal with. And little by little, making it’s way up from her toes, her body started to freeze.

She went into a panic an

d begged White Tiger to heal her. But the more White Tiger spoke to her, the worse it got. Her legs were transforming into huge blocs of Ice and every step she took sent shocks of pain through her entire body. She could barely walk anymore and she started to curse her body and the weather like she had never cursed in her life.

But, like I said she was pretty damn headstrong and she never blamed White Tiger. She stayed with him for a long time, trying to live with a Frozen pair of legs. And White Tiger never blamed her for not understanding what he was saying. He still tried the best he could, but that Viking Princess had a head as thick as a rock.

So White Tiger went to ask the help of his friend Sea Turtle. He thought that if Sea Turtle could teach the Viking Princess how to use the Earth’s limitless energies rather than her own to accomplish her will, she would finally heal. But when the Viking Princess saw Sea Turtle, an entirely different idea came to her mind. She asked Sea Turtle to take her legs away, said that she had always wanted to live and explore the Sea just like her and wanted a tail so she could swim and go where no one in her family has ever been before.

Sea Turtle, who is Mother Earth itself, granted her that wish. She said she could give the Viking Princess a long and sleek tail that would make her glide as fast as Swordfish could. But there was one small trick to it. Sea Turtle gave the Viking Princess one year to live under the Sea. At the end of the year she had to come back to the surface of the Earth and only then would she have to decide whether she would live forever with a pair of legs or a fish tail.

The Viking Princess more than happily agreed, especially since she knew she would choose the tail and not her horrible uncontrollable and painful legs. And so Sea Turtle lead the Viking Princess into the Ocean, and as the waves took her in, slowly the ice in her legs melted, her skin turned to scales and she, she, changed into a Mermaid.

1 thought on “The Viking, the White Tiger and the Mermaid. Part I”